Christmas is coming and a trip to a Christmas market will be a huge treat for kids! We’ve put together this list of the best Christmas markets in Germany, Austria, France and beyond with a baby or toddler.

This Christmas market has been named best in Europe in 2015 (for the second year running). With its some 300 chalets spread over 11 sites in the city centre, it is one of the largest of its kind in Europe. You will find arts and crafts, food and typical Alsatian Christmas decorations. The market is spread throughout the streets and squares of the city and there is even a children’s village at Place St Thomas which invites little ones into a make-believe world of Christmas. Entrance to the Village is free however, there is limited space available. There is a handy fast tram network to take you to vintage markets along the main square and back along the river Rhine. Strasbourg-Entzheim international airport is just 10 km away from the city centre and the Hilton Hotel is a central option which caters well to families. 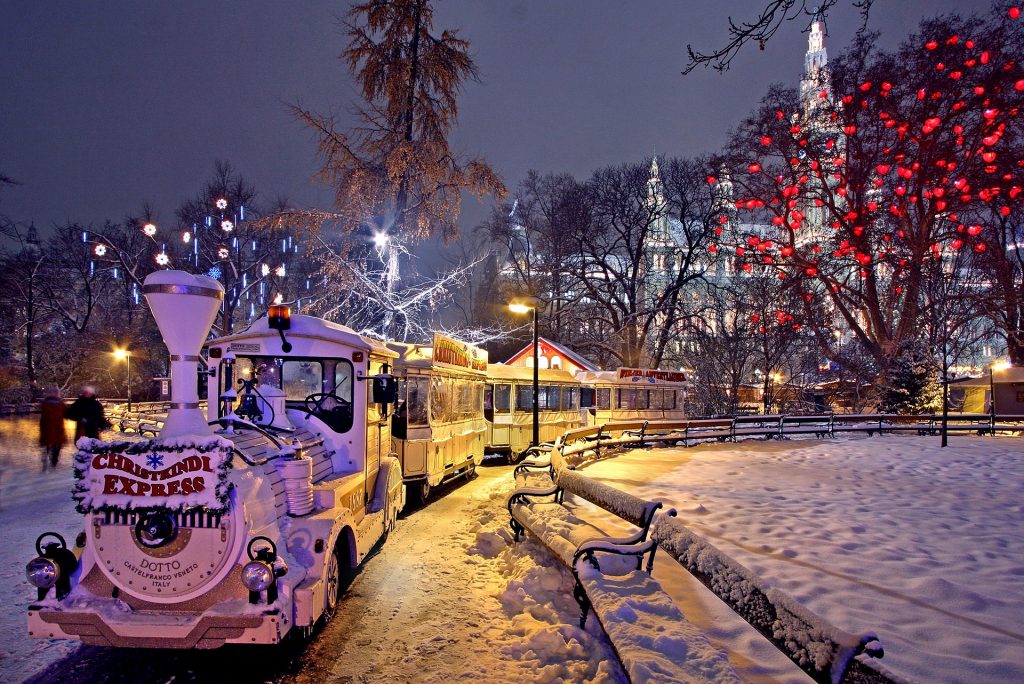 The Christmas markets in Vienna truly are an age-old tradition. There are over 20 official Advent Markets located throughout the city which sell an array of seasonal gifts and mouth-watering treats. One of the most impressive markets is the Viennese Christmas Market in front of the City Hall. The unique backdrop gives this market a charm of its own, and the delicious aromas are sure to lull visitors into the seasonal joy. Inside the City Hall on the ground floor there is an area dedicated to children, where they can learn how to make Christmas cookies or candles. You can also listen to international choirs singing carols with free entrance on Fridays, Saturdays and Sundays.  Vienna is a very baby and toddler friendly city with plenty of amenities and facilities for little ones. You can get from the airport to the city centre by train in only 16 minutes. The Vienna Sporthotel is centrally located and excellent for families with large rooms.

This is a great market for toddlers where you will be enchanted by the special and festive atmosphere of the city. With its hundreds of years of history, the traditional market has loads to offer.  Since 1999, the Children’s Christmas Market on Hans-Sachs-Platz, with its special programs geared for children, has appealed to the whole family. Here, right next to the Christkindlesmarkt, you can find a nostalgic two-tiered merry-go-round, a mini Ferris wheel and a steam railway. There is also a Christmas bakery, where the children can bake little shooting stars, teddy bears or hearts and decorate them. At the children’s post office, kids can post letters to Santa. There are also other kids activities where children can make their own special presents such as candles. The city itself is very baby and toddler friendly and most restaurants will offer high chairs and have changing tables. Using the subway system, the airport is only 12 minutes away from the city center and there are plenty of baby and toddler friendly hotels in the city such as the Novotel Nürnberg Am Messezentrum Hotel which has family rooms. 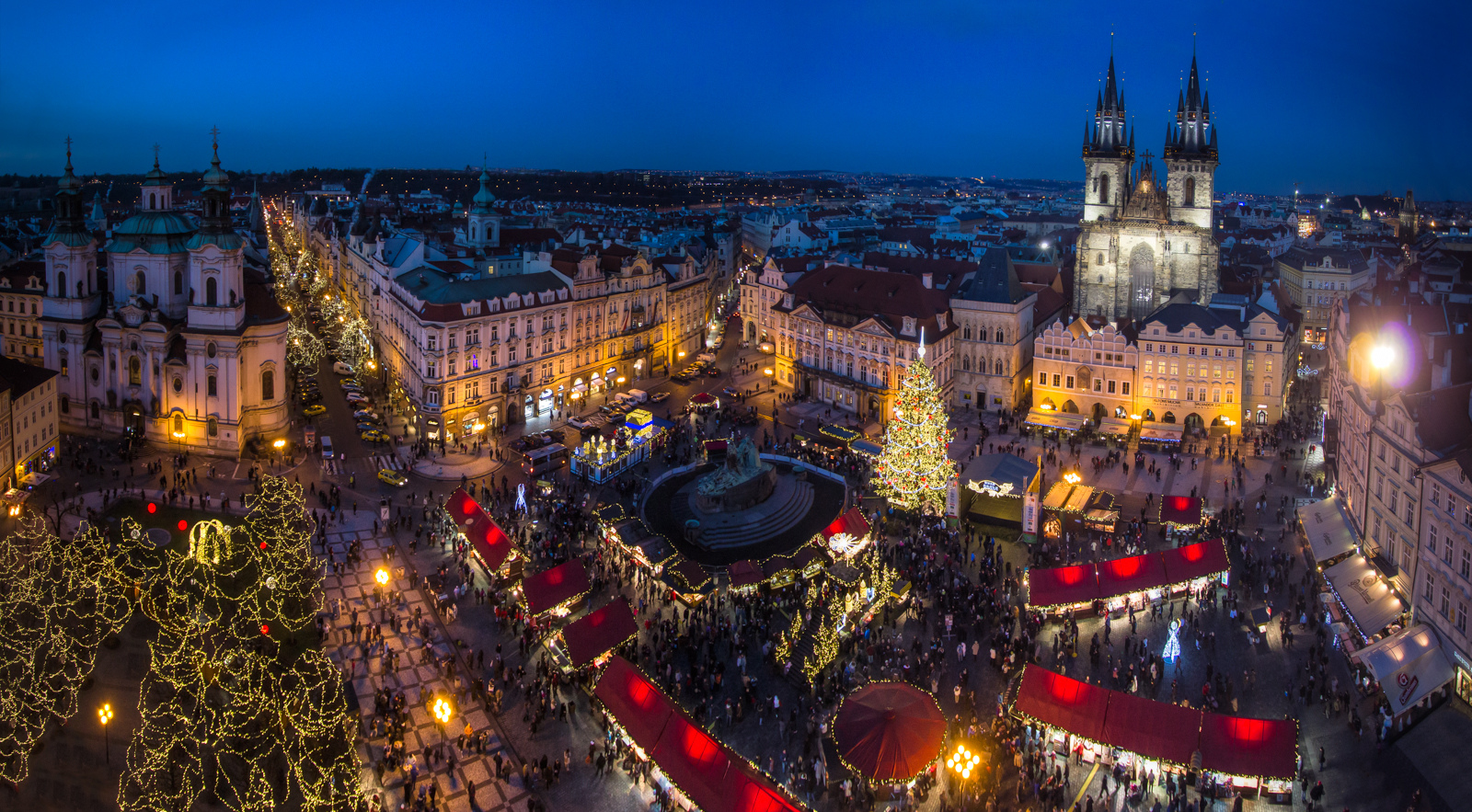 Prague offers the perfect setting for the festive season, with its stunning castle, Old Town and Charles Bridge lit up like Christmas trees.The Prague Christmas markets are open daily at the Old Town Square and Wenceslas Square. A ‘Winter wonderland’ awaits, for families to soak up the festive atmosphere. You can browse the stalls and enjoy Christmas carols, hearty food and hot wine.The Christmas market at the Old Town Square has a stable, where children can stroke sheep, goats and a donkeys. The Aquapalace Hotel Prague is very family friendly and has loads of facilities for babies but is a bit out of the centre. 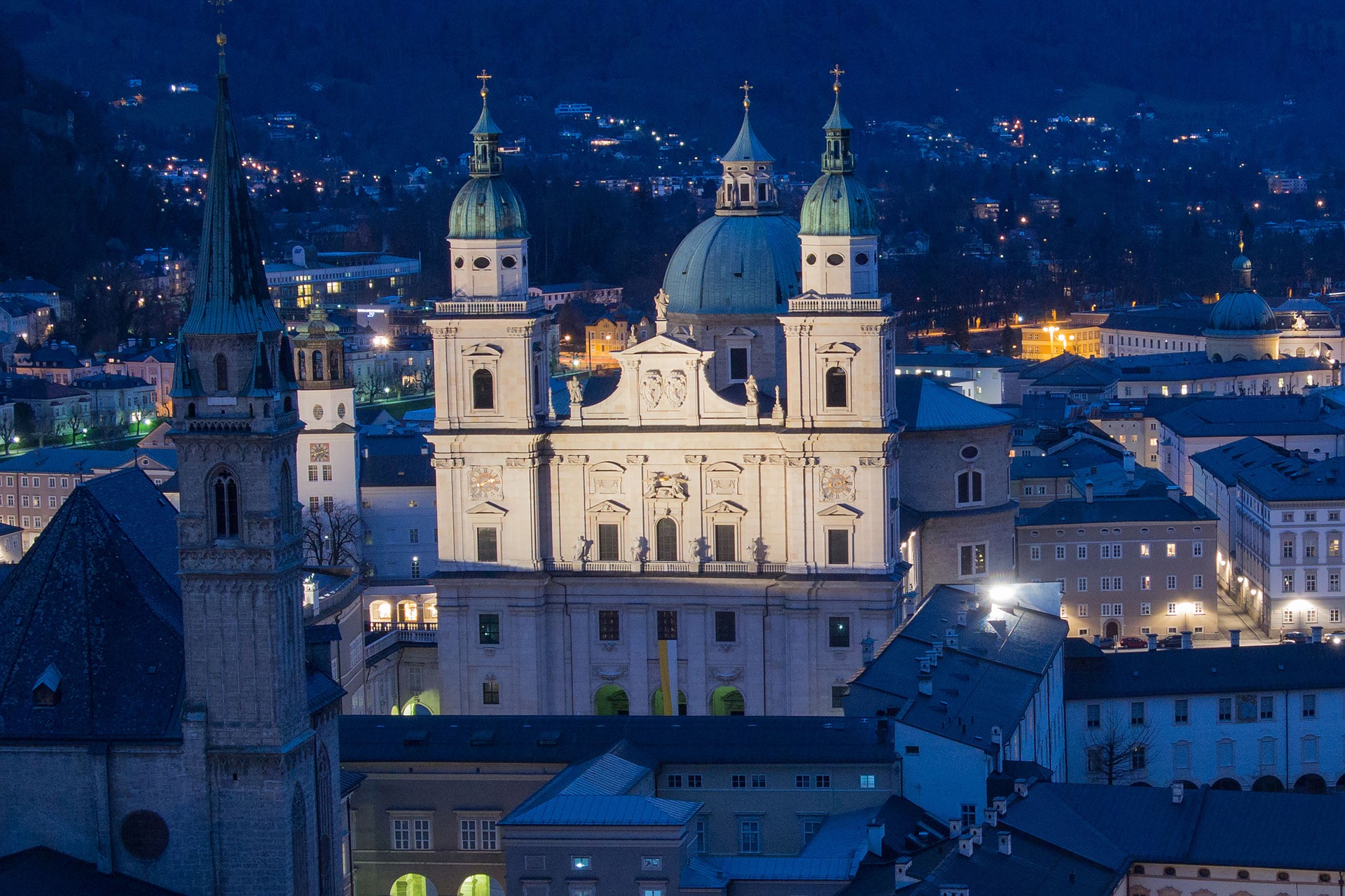 Salzburg may be the city of Mozart, but it’s also the city of Josef Mohr, the local composer who wrote Silent Night, one of the world’s most famous Christmas carols. Salzburg’s Christkindlmarkt takes place around the cathedral, with huts gathered at the foot of Hohensalzburg Fortress. The “Christkind” and its angels will walk through the Christmas Market on the four Saturdays before Christmas between 3:30 and 6:30 p.m. The gentle beings enchant visitors when they walk across Cathedral and Residence Square, making children’s eyes shine. The  Regent Petite France and the Novotel Strasbourg Centre Halles are central and welcoming baby and toddler friendly hotels. 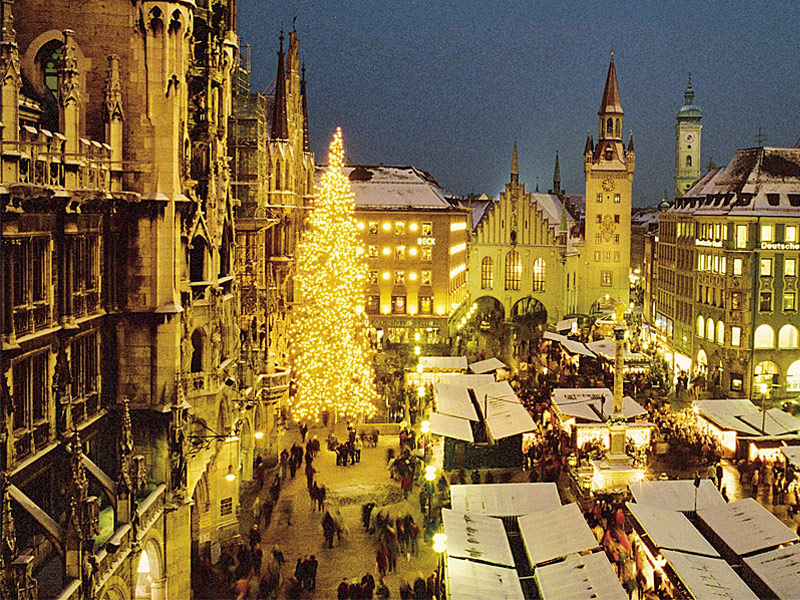 Munich’s main markets are organised around a 100-foot Christmas tree in Marienplatz, where getting stuck into the Germanic fare is one of the most satisfying things a seasonal visitor can do. This is just the beginning and Rindermarkt specialises in handmade cribs. The Christmas Village in the Kaiserhof Residenz courtyard has animated scenes of St. Nikolaus, friendly creatures in the wood, fairies and elves in the forest. The gay Christmas Market on Stephansplatz is great fun with its pink trees and cross-dressing carol singers and it even has a special kids market. Wittelsbacher Platz also has a special area dedicated for kids. The Sofitel Munich Bayerpost is a fantastic hotel; its central and great for babies and younger kids. 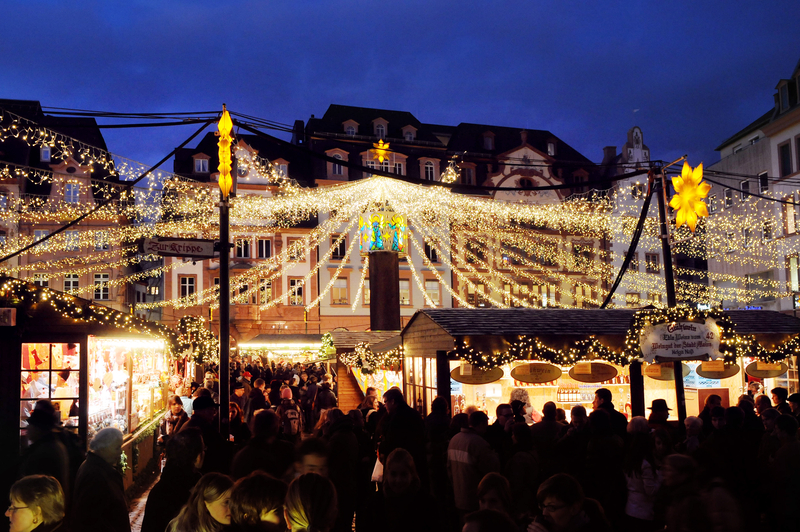 An hour south of Frankfurt and claiming to be “Germany’s oldest city”, Worms proves that small really is beautiful. Strings of lights fan out above the 50 stalls located in the market square. Ice skaters skate on the temporary rink, while children pet the real animals in the “living manger” and get to meet Santa and get a gift of a toy. As well classical music and traditional brass players, there are gospel choirs and even a carol-singing flash mob. From Friday to Sunday traditional and contemporary Christmas songs are performed on the Christmas market stage. Every Sunday in Advent at 2pm you can discover Worms from a fresh perspective on a guided Christmas tour.  Hotel Huttl is a great options with little ones.

Brussels offers five weeks of markets filled with  colorful stalls, fantastic gift ideas and original tasting sessions. Christmas in Brussels is like a scene from a fairy tale and the markets seems to get bigger every year. It now covers almost 2 kilometres of the city. Each of the 240 market stalls is a little wooden-roofed hut selling mainly arts and crafts or food and drink, all of them having a pan-European flavour. The quaint stalls continue, punctuated every now and again by a 35 metre toboggan slope, a big-wheel illuminated with 18,000 lights and, of course, the 200 foot-long skating rink. There is also a gorgeous Christmas tree, a festive Christmas Parade, a Ferris wheel, the merry-go-rounds. The Hotel Amigo is a fantastic baby friendly hotel in Brussels with everything you will need including sterilizers, baby baths, nappies and toys. Babysitters can also be booked last minute.

If you like Christmas, you’ll love Dresden where eleven different Christmas markets lie right at your feet.The Dresden Striezelmarkt is located on the Altmarkt Square, in the historical city centre. It is surrounded by various themed Christmas Markets, stretching up to the main railway station and the Albertplatz. The Traditional Christmas Market at the Frauenkirche is at the heart of Dresden’s historic old town where a romantic Christmas scene reveals itself amidst the festive lights. The market is located on a laneway home to some 45 merchants selling traditional handicrafts and culinary specialities.  Children who happen to meet Santa in Münzgass at 4pm and who perfectly recite a poem or song to him will be lucky enough to receive gifts from Santa’s sack. The Hilton and The Park Inn by Radisson are fantastic family friendly options in the heart of Dresden. 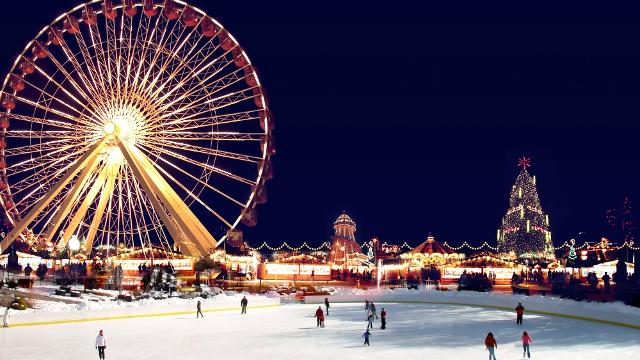 The market in Hyde Park, central London has two circuses, an observation wheel and an ice-skating rink that circles the Victorian bandstand. There’s also an ice forest with intricate sculptures and ice castles in a ‘Magical Ice Kingdom and a traditional, German style Christmas market’. There’s also the child friendly ‘Santa Land’ complete with Santa’s grotto. Churros, frothy hot chocolate and mulled wine are on every market stall. The Athenaeum Hotel is a great option for those travelling with babies and toddlers. where rooms are stocked with sippy cups, plastic bowls, bibs and cutlery, teddies, building blocks, toy trains and story books. See ‘London’ for some great baby and toddler hotel suggestions near Hyde Park.

Other great markets can be found at Valkenburg in Holland (set in caves), Lucerne in Switzerland, Stockholm in Sweden, Innsbruck in Austria, Cologne and Berlin in Germany, Copenhagen in Denmark, Krakow in Poland and Vilnius in Lithuania and Paris in France. Unfortunately we didn’t have the space for all of them but wherever you go have a …