Atrani – an Undiscovered Town on the Amalfi Coast, Italy

Atrani – an Undiscovered Town on the Amalfi Coast, Italy

Atrani won’t be the first place which comes to mind when you think of Italian beach resorts. But it is the place you should visit if you want to find out what Italy is truly all about. Even though Atrani is just a short drive away from Amalfi, the famous and bustling holiday spot, it remains unspoiled by mass tourism and is one of Italy’s best-kept secrets.

Atrani is a coastal fishing village with a population of less than one thousand. It nestles in the divide of two steep cliffs on the shore of the Tyrrhenian Sea. Its tier upon tier of multi-colored houses rises above a beautiful stretch of pristine sand. It is one of the most idyllic and picturesque settings in Italy.

Unchanged by the passing of time, Atrani is a place just waiting to be explored. You can climb the steps up from the beach level and wander through the narrow, winding streets. There you’ll discover thirteenth-century baroque churches and piazzas with spurting fountains. Be able to listen to the tolling of the bell from the sixteenth-century tower as it chimes and breaks the quiet of the siesta hour. Ponder life over a drink on a cafe terrace in Piazza Umberto, the main square. If you have that uncanny feeling of deja vu while you’re there, don’t be surprised. Atrani’s scenic streets and stunning coast have been the chosen location for numerous films.

Atrani appears to be trapped in a time warp, but nothing stays the same forever. When you go, don’t expect modern and don’t expect glitz. Atrani is authentic Italian. The facades of the houses lining the square have their own unique beauty. Three or four stories high and with shutters flung open to catch the slight breeze coming in off the sea, they are like a Giovanni Colmo painting which has been infused with life. Full of character, they might not have weathered the years as well as Sophia Loren, but they are just as beautiful in their own way. Like a good wine, Atrani has aged to perfection.

Any photographs of Atrani you upload to Instagram will have real heart and soul. Here you can capture the peeling paintwork, a time-worn woman dressed in black sat on an old chair by her front door or a lazy cat asleep in the afternoon sun. Atrani is the place to experience Italy as it should be. Eat the same food as the locals, drink the same drinks and at the same price they would pay for it. Does anyone need a better reason to go? 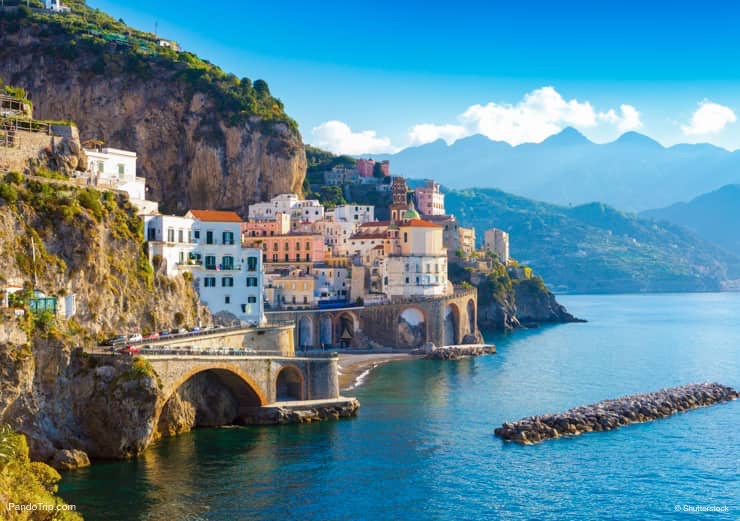 The Best Time To Visit Atrani

Atrani enjoys the same wonderful Mediterranean climate as the rest of the Amalfi Coast. But just like everywhere else in the world, the weather in Atrani will never be one hundred percent predictable. To be able to explore in comfort and to avoid the peak temperatures of summer, the best time to visit Atrani is in May or September.

Springtime has favorable temperatures which on average range between 12°C and 25°C. The sea’s warm enough for swimming, and there’s never a crowd on the beach. There’s also the added bonus of the trees and flowers blossoming and scenting the air with their fragrance. In Autumn, even though the locals might be donning their sweaters, the temperatures remain in the high twenties. Late Autumn can also see unexpected heat-waves occurring, so if you’re planning on going then, make sure you still pack plenty of sunscreen.

How To Get To Atrani?

Getting to Atrani from where you’re staying on the Amalfi Coast is simplicity itself. If you’ve packed comfortable shoes, flip-flops are not recommended, then one of the best ways is to walk. From Amalfi, take the seafront route to Atrani. It takes around fifteen minutes. You’ll get some sea air and great views of the coast along the way.

From Ravelli, a three-kilometer trail leads inland through terraced vineyards and groves of lemon trees. It takes around half an hour – depending on how many times you stop to take photos. Get ready to give your leg muscles a workout at the end. There’s a steep flight of steps, about one thousand five hundred in all, to be negotiated before you reach the town. You can also take the bus. The number 5110 runs every half an hour, back and forth, between Atrani and Ravelli.

If you’re staying further afield in Positano, Minori or Salerno, try catching the local ferry to Amalfi then continuing on foot from there. From Positano, the sailing is around half an hour and costs just over $9. It’s a bargain and a beautiful way of seeing the Amalfi coast from a different angle. 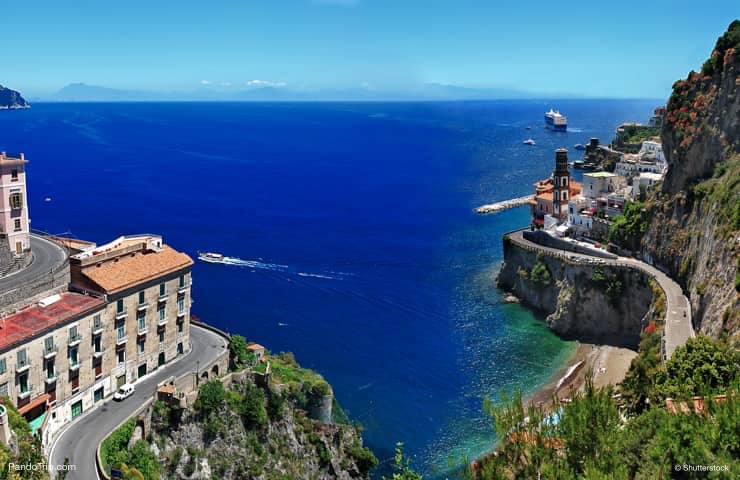 The heart of any Italian town or village is its square. The square or piazza is the place to see and be seen. The central focal point of Italian life. Atrani’s square or the Piazza Umberto I is no different. To find the piazza, you’ll need to turn your back on the sea and pass under the arches of the viaduct which carry the main Amalfi Coast Road. When you do, be prepared to feel as if you were stepping back in time. Even the fountain, which in historical terms is a recent addition to the piazza, is almost a century old.

Local and visitors alike gather at the tables on the terraces of the bars and cafes to drink coffee or sip an aperitif. Children play, skipping across the cobblestones which date back as far as medieval times. Take time to investigate the piazza, and you’ll find some interesting hidden treasures. The small supermarket with its deli section of traditional Italian sausages, cheeses, and olives. The barbershop where masculine banter is almost as important as a haircut. The tiny, claustrophobic tabacchi which sells everything from chewing gum to cigarettes and bus tickets. The darkened interior of a coffee shop with a delicious array of sweet pastries. While you’re there, forget checking your watch to see what time it is. Some things are just timeless and Atrani’s Piazza Umberto I is one of them. Make sure you take enough time to enjoy its vibrant antiquity. 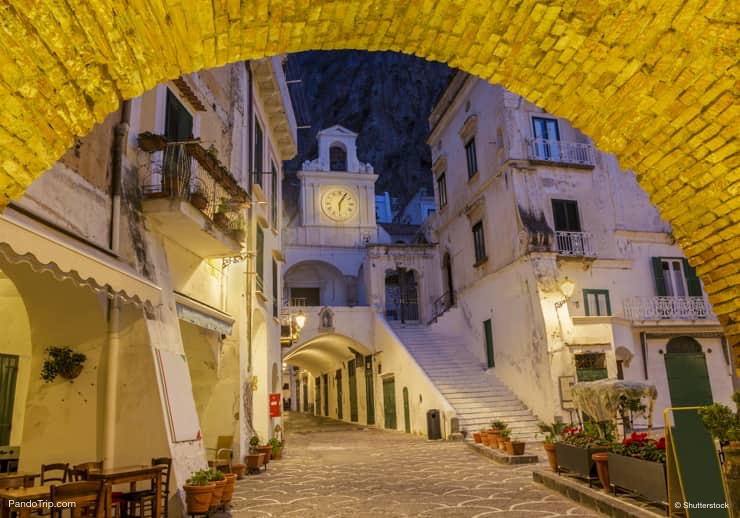 Finding a more ideal place along the Amalfi Coast to spread your towel than on the beach at Atrani would be impossible. The beach curves around the small bay and is sheltered by the town and cliffs behind it. From wherever you are on the beach, no matter which way you look, you’ll be astounded by the coastal scenery of this part of Italy. Accentuated by the pure Mediterranean blue of sea and sky, even the word picturesque doesn’t do it justice.

At Atrani, the Tyrrhenian Sea is clean and clear. It’s perfect for swimming and even better for snorkeling. If you just want to laze the day away and catch some rays, a couple of sunbeds and a parasol costs under $25 to hire. If swimming and the sea air give you an appetite, it’s just a short stroll over the sand to the beach cafe or a step or two more to the piazza behind it. 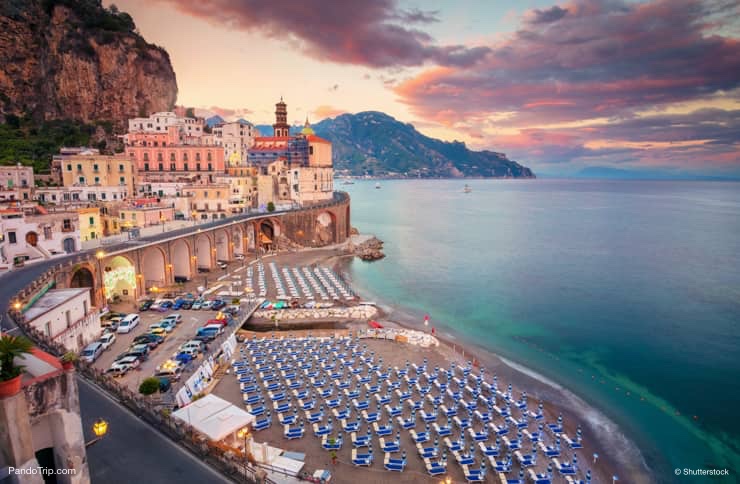 Whether you approach Atrani by road or by sea, the first thing you’ll notice will be the Santa Maria Maddalena Church and the bell tower which stands next to it. The thirteenth century Rococo facade of the church is one of a kind along the Amalfi Coast. Externally it’s as ornate as an iced cake. The decorated white walls adorned with statutes are topped by red-tiled roofs and three intricately patterned cupolas. Internally the embellishment goes overboard with arches and religious artwork in true Baroque style.

You don’t need to be religious to enjoy the annual Festival of Santa Maria Maddalena. The mid-summer celebration is held in July, and it is when the whole population of Atrani hits the streets to honor St Mary Magdalene who, legend has it, saved the town from a pirate attack. A decorous procession takes place, and an image of the saint is carried from the church to the beach accompanied by a local band. As the bell tolls in the tower, a blaze of fireworks lights the sea to mark the beginning of a night of festivities. Everyone is welcome to join in with the feasting and fun. So if you’re in Atrani on the right dates for the festival, don’t be shy. 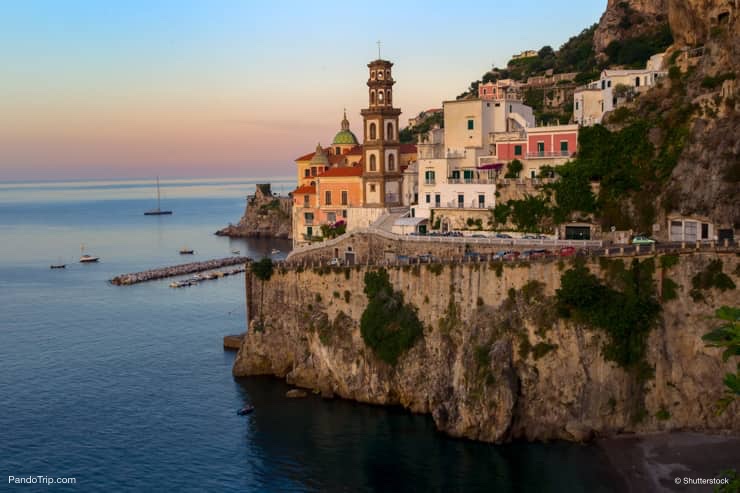 Italian food is often simple but incredibly tasty. The secret behind their culinary excellence is using quality, fresh produce. It would be unthinkable to be in Atrani without tasting some of the local food. Being so close to the sea, shellfish and the catch of the day have a strong influence on the cuisine. For first-class quality, with a friendly family atmosphere, try the Ristorante Savo. Sit out on the restaurant terrace to enjoy a tasty risotto or plate of squid ink pasta.

Le Arcateis right on the beach, so you can have your food with an unbeatable sea view. They serve amazing homemade pasta dishes. The shrimp and zucchini scialatielli is a tasty regional dish of the Amalfi Coast, and they prepare it to perfection. You won’t get a better or fresher pizza than the one they serve here either. The best part? Watching the chefs as they prepare your meal in the open plan kitchen.

If you just want to chill out over drinks and a snack, then the Bistrot il Birecto in the piazza is the place to be. Sit under one of their enormous parasols and nibble on a slice of Bruschetta – grilled bread with tomatoes and Parma ham – while sipping a glass of local wine. For a light lunch, snack on a parmegiana de berenjena – grilled aubergine with a parmesan topping – or just a dish of olives on the side next to a nice, refreshing beer.

Where to stay in Atrani

Once you’re in Atrani, you’ll find it will probably cast you under its spell, and you won’t want to leave. You may even want to plan another vacation and return to Atrani to stay. There’s not a never-ending choice of hotels in Atrani as it is a small place, but there’s a couple which are seriously worth checking out.

The Eva Rooms is a bed and breakfast which is right on Atrani beach. The rooms, which are a combination of modern soft furnishings and antique Italian furniture, have beautiful views from the balconies out over the bay.  The B&B’s hostess is friendly, plus there’s free wifi, and a good breakfast included.

The Palazzo Ferraioli is a hotel and wellness center. The rooms are named after female film stars and each one is decorated in a unique and ultra-modern style. The hotel offers guest the use of their on-site spa with Finnish sauna and hot tub as well as a sun terrace with amazing views. Breakfast is served buffet style. To reach the hotel reception, you need to climb a few steps from the piazza. 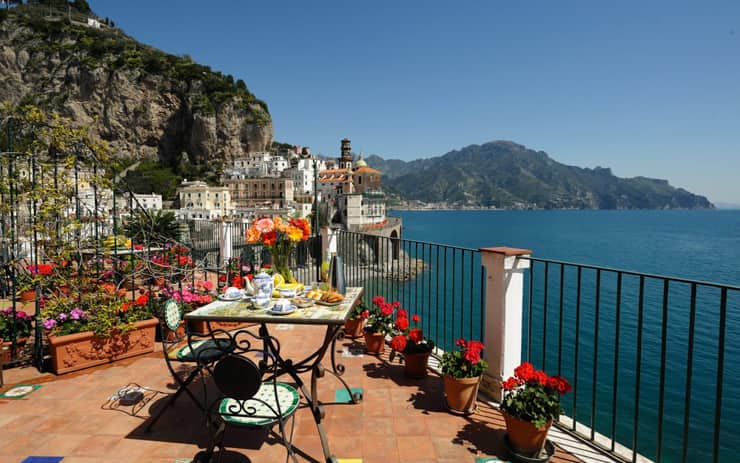 Thanks to: Pando Trip